The creator and co-star of Catastrophe returns to The Bill Murray to road test some new material.

Owen Colgan, Irish cult comedy hero, sex symbol and Hardy Bucks star hits the road for his biggest tour yet. After a hugely successful tour in 2018 with sold out shows across Ireland, Owen is back with a new instalment for 2019 – The Woke Tour.

Currently touring the world with his new show Wunderbar, which he crafted at The Bill Murray, Eddie Izzard was interviewed in The Joe Rogan Experience. Towards the end of the two and a half hour long podcast, the pair discussed Izzard’s approach to writing new material and his preference for a slow paced environment where he is free to experiment.

Joe Rogan: Do you still go to clubs at all?

Eddie Izzard: I don’t so much. I was reading the definitive thing on Robin Williams and how he would jump in the clubs and do stuff and that doesn’t really work for my stuff. (…)They have the [Bill Murray] club in Islington. No, Angel, in London sort of Northeast London. And they had you know, shows going on at 6, one at 7, and I would take an hour of that and just do that again and again and again. So I’ll take an hour and I’ll go out for an hour and workshop a show. As opposed to coming on and doing 15 minutes off the top of my head because I find if I’m completely going scattergun just trying to find funny that doesn’t really help me, I need to keep crafting the stuff cause then I can use it in a show.

“Come and see some old twat who should  probably give up say some boring shit that isn’t even funny or  interesting.” – Bridget Christie

We’re thrilled to announce that Frank Skinner, famous for being Frank Skinner, is coming back to The Bill Murray for three work-in-progress shows in May and June.

The first bank holiday weekend of May is coming up, and what better way to spend it than by stopping by The Bill Murray for some quality comedy.

Saturday kicks off with the FREE ANGEL COMEDY WRITING GYM at 12pm, followed by a live podcast recording from THE LITTLE DUM DUM CLUB and, of course, our free award-winning Angel Comedy shows running through the night.

On Sunday, we are holding the first session of INTRO TO CLOWNING: RELEASE YOUR INNER IDIOT with Jonathan Gunning, co-founder of Clowns Without Borders Ireland.

In the afternoon, the Little Dum Dum Club takes over The Bill Murray with not ONE but TWO live podcast recording.

In the evening, our resident improv troupe SHOOT FROM THE HIP will take back what is ours.

On Monday, we’ve got a jam packed bank holiday programme, starting at 2:30pm with ZACH ZIMMERMAN follwed at 4pm by TOMMY DASSALO

Then at 5.30pm we’ve got stand-up from Mock the Week and Live at the Apollo star ED GAMBLE

At 6.45pm we’ve got a work-in-progress show from Massive Dad star and co-host of the Nobody Panic podcast STEVIE MARTIN

And we round things off with SPARK TRUE STORYTELLING at 8pm, where performers and audience members alike get the opportunity to share stories on a chosen theme.

And if that doesn’t tickle your May Day fancy, then we don’t know what will!

To see 2019 in in style, why not treat yourself to Eddie Izzard?

Please be aware we cannot guarantee refunds if you accidentally buy tickets for the wrong date or can no longer use your tickets – please make sure you are buying for your intended date.

Get your tickets here: 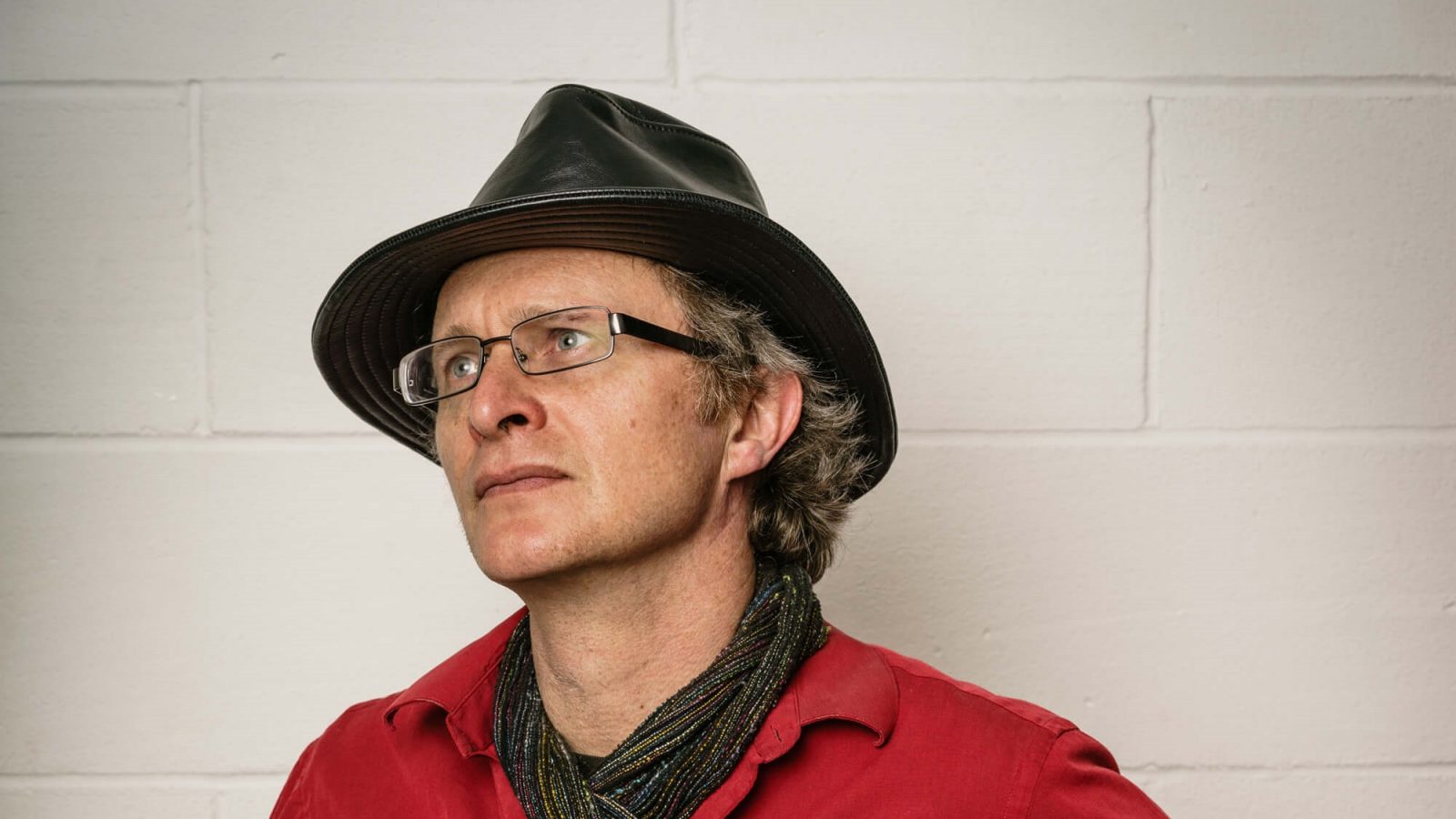 We’re delighted to be introducing a series of shows and a comedy course by Simon Munnery throughout the first months of the year.

Simon is a British Comedy Award nominee, Edinburgh Comedy Award nominee and Chortle Award winner. His stand-up career spanning 32 years has seen him regularly perform all over the world and star in several of his own major television and radio projects. He is best known for his character creations Alan Parker: Urban Warrior, Buckethead and The League Against Tedium. His most recent television appearances include The Alternative Comedy Experience (Comedy Central), The Culture Show, It’s Kevin and Stewart Lee’s Comedy Vehicle (BBC 2).

Simon Munnery will be teaching a comedy course at The Bill Murray on Sunday mornings throughout the month of January and February where he will cover how to go “from 20 to 50” when building a show – characters, monologue, dialogue, clowning, shape of an hour, the visual element/props, themes vs narrative arc. Find more information and book a spot here.

He will also be performing his latest festival shows, as well as retrospectives:

Lovers of haute cuisine are greeted and served by a diligent staff of four (all played by Simon Munnery) at La Concepta. Head Chef Munnery promises a varied menu of conceptual dishes comprising dishes of art, jokes, songs, anecdotes, aphorisms, audio installations, choreographed dances and more. Sous Chef Munnery will be prepping every dish. Maitre d’ Munnery will be ensuring your dining experience is magnifique. Trainee Chef Munnery will be hoping to keep out of the way and not ruin things again.

“I went to a funeral the other day. Caught the wreath…” That’s what came to me, from the mysterious source of the inexplicable. Hear the story of the joke, the painting, and what happened next.

Alan Parker-Urban Warrior is a bedsit anarchist inspired by the lyrics of punk bands. He’s never quite got over the demise of Sham 69 and the subsequent annexation of youth culture by the iniquitous forces of global capitalism. Once the most radical man in Britain, now the only radical man in Britain, Alan stands alone in his heroic fight against the system.

Simon Munnery has always had a fairly anarchic approach to comedy, one that doesn’t show any sign of abating as he matures. This show is just that. Sort of. Well, it’s live comedy, but performed in a box and witnessed by the audience via video line and amplified into a huge projection of Munnery’s face as he performs. Film? TV? Comedy? Performance art? The only thing that’s certain is that it’s funny. 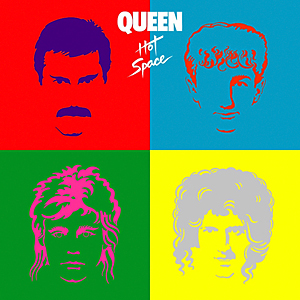 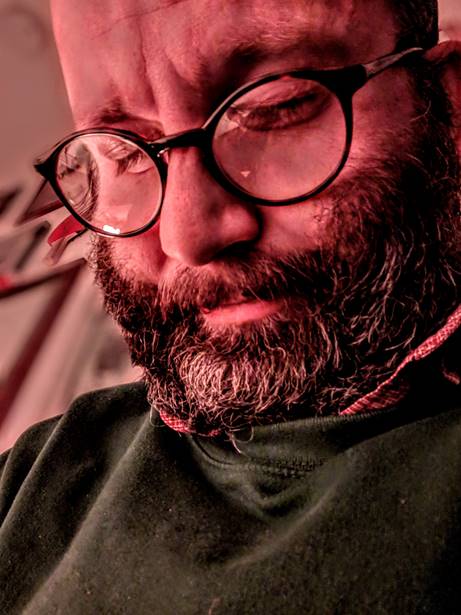 Daniel Kitson is doing work in progress for his latest theatre show, “Keep”. 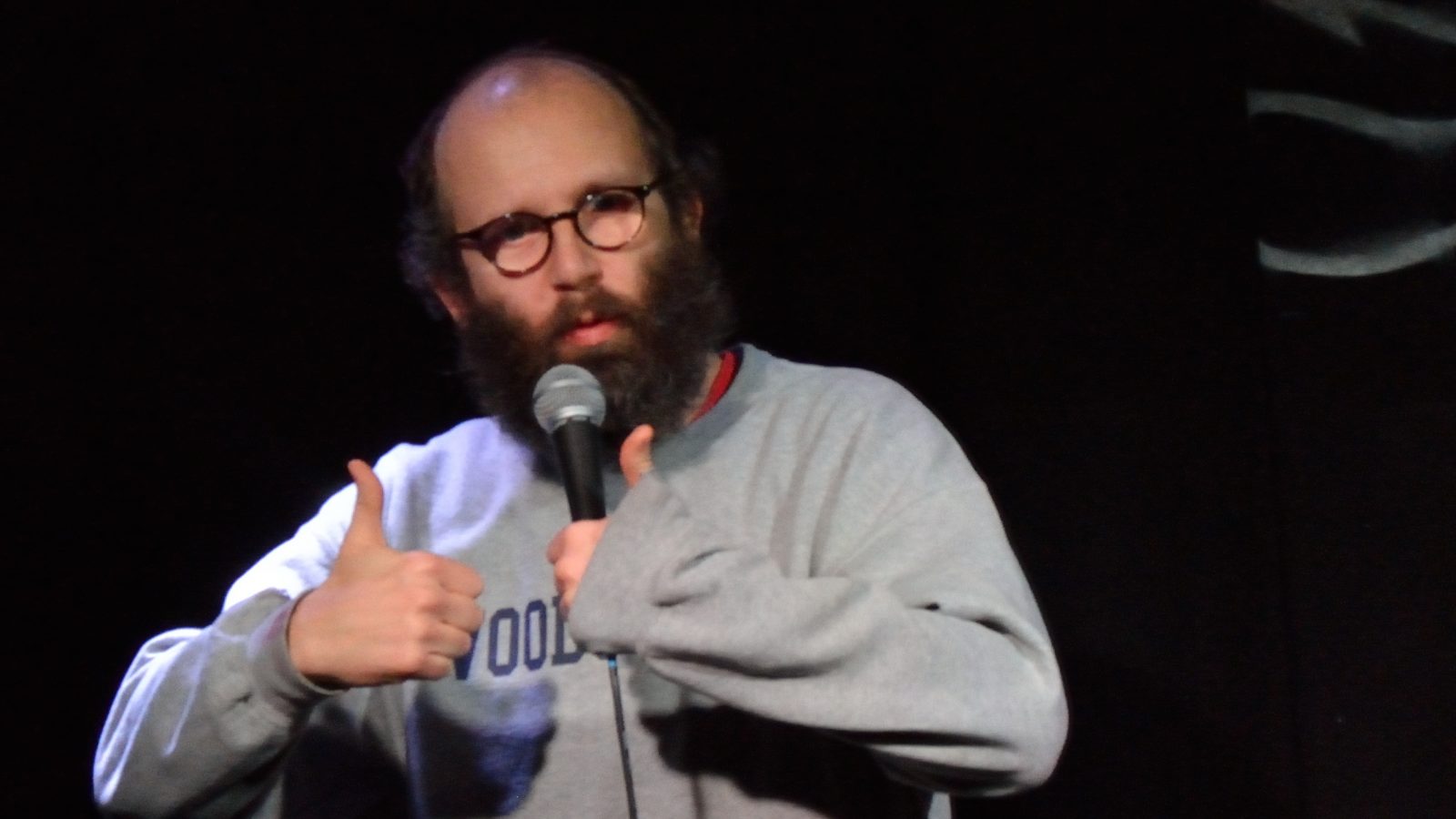 Not really work in progress. Just something to do.

With “nothing” to “very little” in the way of material or ideas Daniel Kitson is getting out of the house, Staying loose, Ticking over, Keeping his eye in, Strengthening his core and putting some Shape in the Day. It will mainly be talking although there will almost certainly be some pauses and possibly a bit of absent minded chanting. He may also, introduce one or more others to participate in nascent skits or fill time with their own thoughts and feelings but will more than likely be alone on stage. Talking, pausing and chanting.

Less like the first steps on a creative journey and more like someone rummaging through cupboards and making a pile of stuff for the charity shop.

Tickets for these shows will be released on the day of the show at 12 pm (or 2 h prior to the show if it starts at 1 pm or earlier). Remaining and additional tickets will be sold on the door. 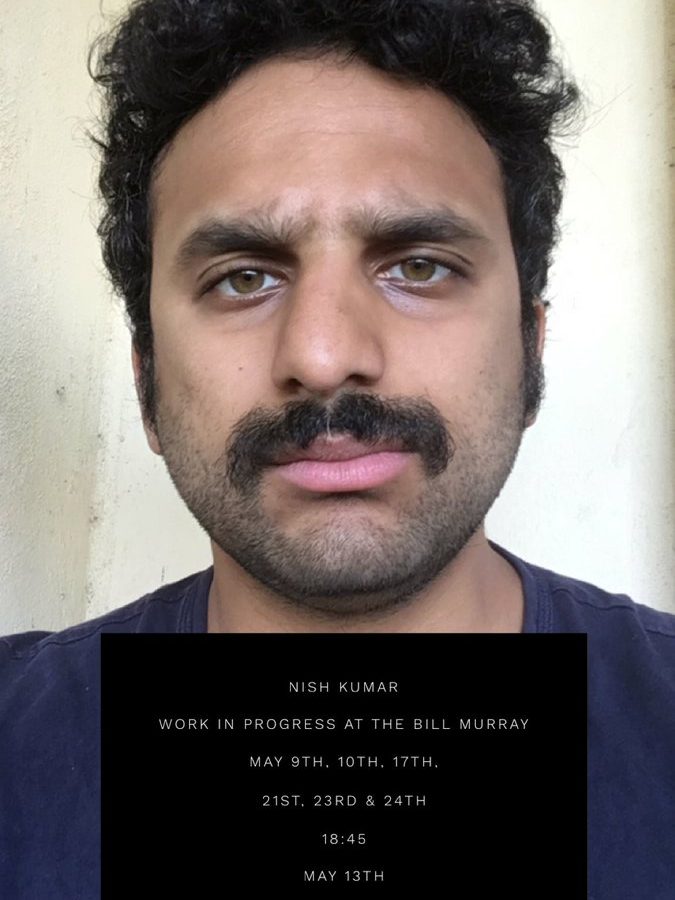 The wonderful Nish Kumar returns to The Bill Murray this May for a run of work in progresses of his new show: It’s in Your Nature to Destroy Yourselves.

The Double Edinburgh Comedy Award Nominee & host of The Mash Report trials new material for a national tour. The title is a quote from Terminator 2. There will be jokes about politics, mankind’s capacity for self-destruction and some jokes that simply don’t work.

Come watch someone build something. 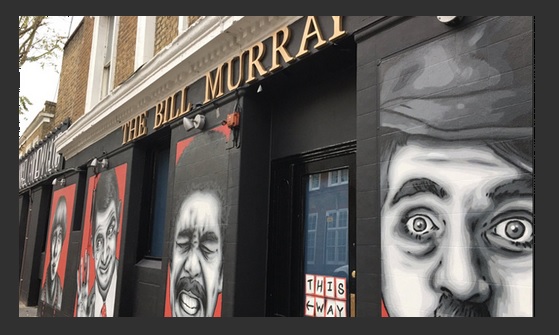 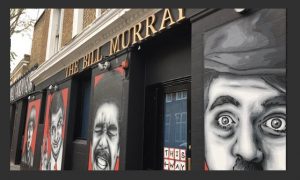 The Bill Murray has been named the best comedy venue in London in this year’s Chortle awards!

The wonderful Islington bar, crowdfunded by you, our amazing fans, to be the dedicated comedy space that it has become has triumphed over more established venues such as the Soho Theatre and the Comedy Store! 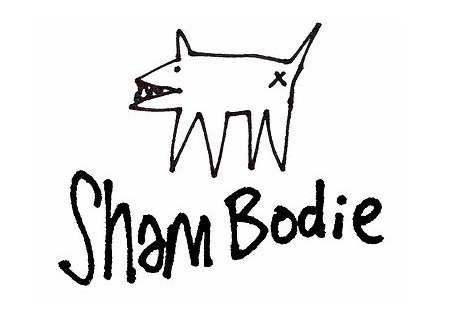 Powerhouses of Manchester comedy are bringing their unique show to London town, a source of fear and confusion. With a great line-up including Norris & Parker, Trevor Lock and Lou Sanders, and with free hotdogs at half time, don’t sleep on this! 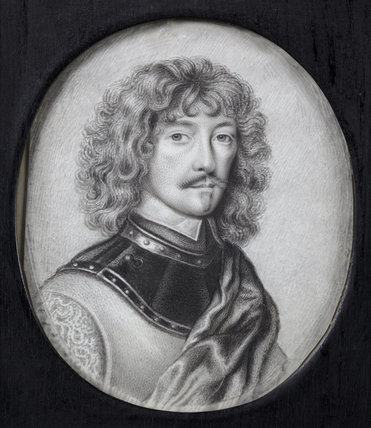 Angel Comedy is based in our very own pub, which we named The Bill Murray. But who is this mysterious “Bill Murray”?

William Murray, Bill to his friends, was born in 1600 in Fife. From a young age his talents were obvious, and his parents discarded their other nine children in a wood, and focused all their energies on raising Bill.

Finally, at the age of six months, he got his big break. His Uncle Thomas, a royal courtier, arranged for Bill to be educated alongside the future King, Prince Charles.

Bill and Charles became Best Friends Forever, and the Prince, as a mark of this friendship, appointed Bill as his whipping boy. Beating a prince was illegal, so a proxy was appointed to be thrashed in his place whenever discipline was required. These were great days for Bill, who nearly died on several occasions.

In 1626, Charles, now King Charles, made Bill his Gentleman of the Bedchamber. Another great honour. Bill now got to help the adult King dress, eat, and was guardian of the brimming royal water closet.

In 1642 the English Civil War broke out, and Bill played a pivotal role supporting the monarchy. He made regular trips to France to assist Queen Henrietta Maria in seeking the Pope’s support, and also to buy wine, cheese and powerful firecrackers, or ‘bangers’, which were banned in England at the time.

On his return from one such trip Bill was arrested by the Parliamentarians and incarcerated in the Tower of London. Inspired by the attempts of fellow inmates to catch the ghouls that haunted the Tower, he wrote a play. Ghoulhunters was so popular that it was re-staged 32 years later, with women (played by men) in all the lead roles.

For his loyalty, Bill was ennobled by the King. As First Earl of Dysart he gained lands, power and a hereditary smugness that exists to this day in remote parts of Fife, and abundantly throughout Scotland.

The war lost, in 1649 Charles was tried for treason and sentenced to death. He felt, quite strongly, that Bill, as his whipping boy, should be killed in his place. However Bill, who’d learnt a thing or two by this stage, declined, and so King Charles I was beheaded, and died shortly after of a broken heart. 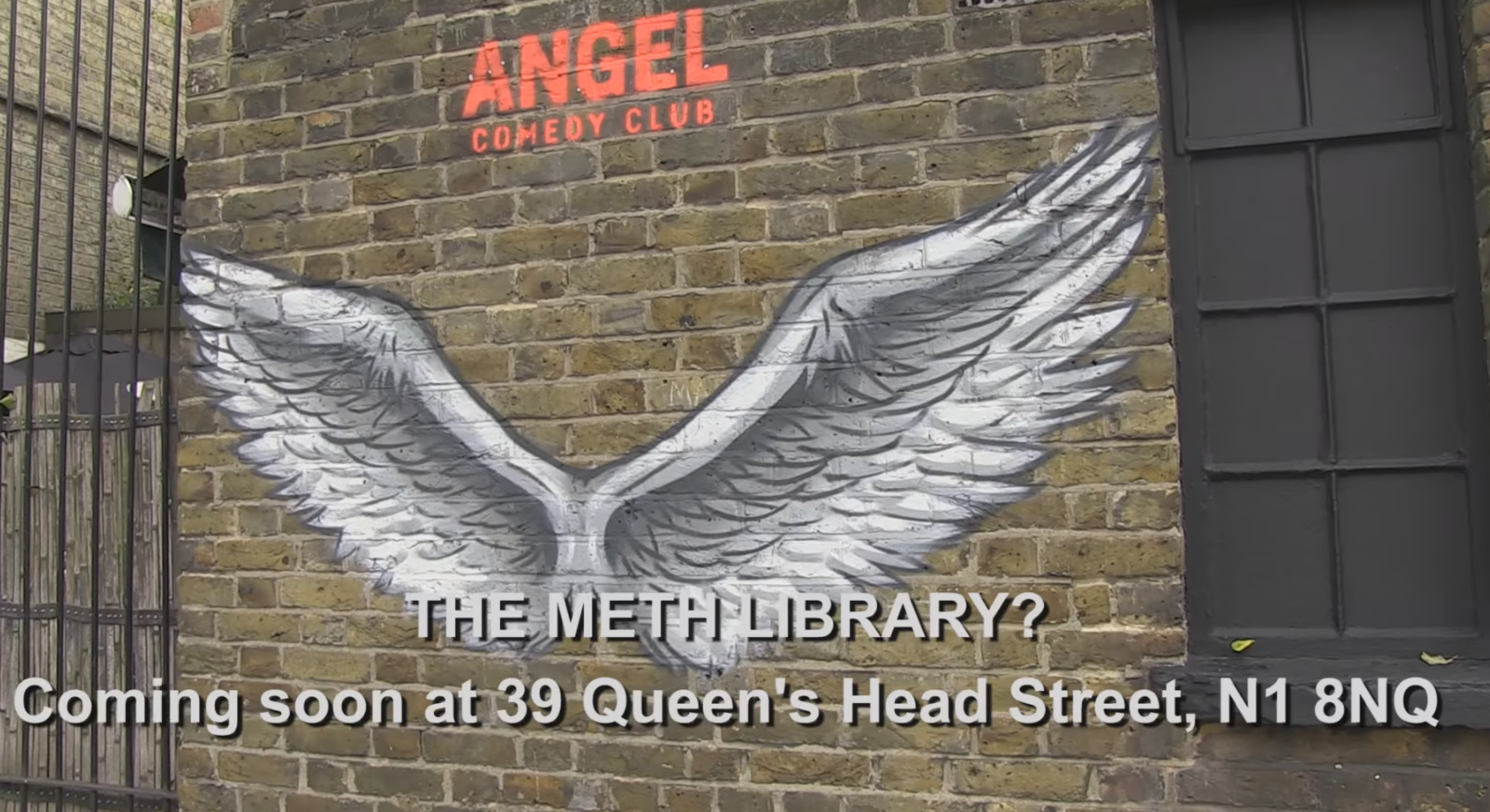 So it’s almost time for the official launch of Angel Comedy 2.0, our permanent venue, funded via Kickstarter. As well as our new HQ, it’s also a local pub, and its name will probably outlast us a by a long time. So we wanted to create a legacy, by honouring someone important to us and who reflects the spirit of what we do.

We’ve kept the name under wraps until launch, but this week, we actually fixed the letters above the door. So, what’s the pub actually going to be called?