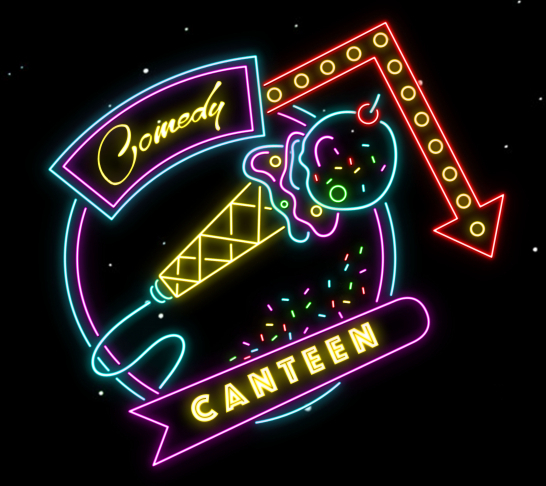 Love comedy? Love food? Then come to Comedy Canteen, where our fare is aimed square at your pie-holes and your funny bones.

In this autumn special, there’ll be:

- the best Brexit Box ever, built by Sooz Kempner and Eleanor Morton

- pumpkin carving, which can’t possibly be a bad idea. Right?

Your capable/incapable hosts will be Cassie Atkinson and Matthew Highton, and you might even catch a glimpse of the Easter Egg *unt (because Easter Eggs aren’t just for Easter).

Together we’ll create comedy umami and feast ‘til we’re sick. (Well you’ll get a few snacks. But you might laugh until you spew.)

WANT TO KNOW MORE ABOUT THE ACTS? HERE YOU GO.

Foxdog Studios created the award-winning show Robot Chef, in which the audience controlled an elaborate cooking rig with their smartphones, preparing a full English Breakfast. Peter and Lloyd are IT consultants who accidentally started making live comedy shows with technology, creating homemade gadgets including a head-mounted sausage cannon. Their comedy is truly interactive, imaginative and joyous. “The most loopily inventive show on the Edinburgh Fringe.” (iNews) @foxdogstudios

George Egg is a fabulously skilled "anarchist cook", who can cook a three-course meal using parts salvaged from a vehicle, or equipment from his shed. Think Moules-Frites, made with a wallpaper steamer. He’s hosted a Food Programme special on food and comedy, and been on Bake Off’s Extra Slice, to make a tiramisu using hotel-room ingredients (UHT milk never tasted so good…) His fans include the Observer, who call him "brilliantly funny" and the Independent, who say he's "genuinely unique". @georgeegg

Sooz Kempner is an award-winning stand-up/singer/writer. Her shows cover topics from gaming to Brexit (she co-starred in Jonny Woo’s Allstar Brexit Cabaret) and she co-hosts the Mystery on the Rocks podcast. Her Twitter thread on being a Christina Aguilera tribute act in Ayia Napa went viral, and her accolades include winning the Funny Women Variety Act Award and a Musical Comedy Awards Best Newcomer prize. @SoozUK

Eleanor Morton is a Scottish stand-up, writer and actor who has supported acts including Josie Long, Tony Law and Frankie Boyle. She has written for News Quiz, Newsjack, and multiple BBC Scotland productions, and is a board-member of alternative night ACMS. She regularly performs with the Weirdos Comedy Collective and was part of their award-winning comedy-on-ice, The Battle for Icetopia. @EleanorMorton

Comedy Canteen is created and organised by Alex Hardy, a writer and producer who is obsessed with food and comedy. She won a Funny Women writing award for scenes from her sitcom Nosh, about being a Deliveroo rider. She writes for Daily Mash, Channel 4’s Mashed, Radio 4’s Dead Ringers and News Quiz. She produces telly with the likes of Dave Gorman, directed Joz Norris’s award-winning Fringe show Joz Norris is Dead: Long Live Mr Fruit Salad, and won a Chortle award as producer of Tony Law’s ice-skating show The Battle for Icetopia. Please be as excited about Comedy Canteen as she is. @alexhardywrites @ComedyCanteen